What are the indices of deprivation?

The most recent indices of deprivation were published on 26th September 2019.

The Indices of Deprivation measure relative levels of deprivation in 32,844 small areas or neighbourhoods, called Lower Super Output Areas (LSOAs), in England. Each area is given a score and a rank for seven distinct domains of deprivation which are combined to calculate the overall Index of Multiple Deprivation. Summaries are also provided at a Local Authority district level.

Nottingham City comprises of 182 LSOAs as shown in the map below. 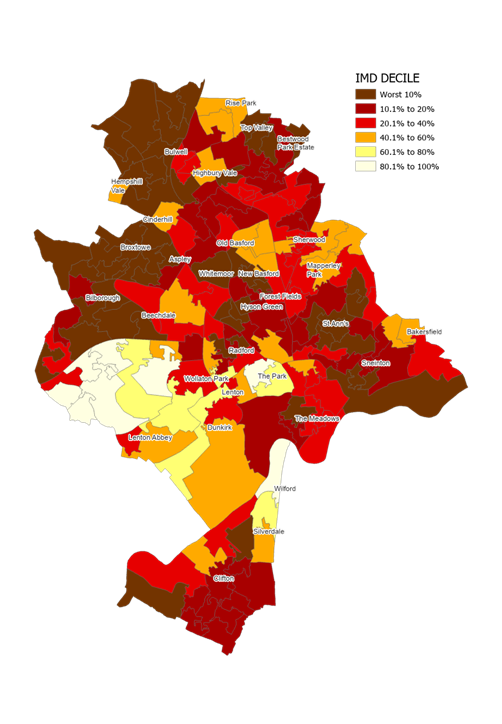 The chart below shows the percentage of LSOAs which fall into the different categories (Worst 10% which are the most deprived through to the least deprived categories 60.1-100%). 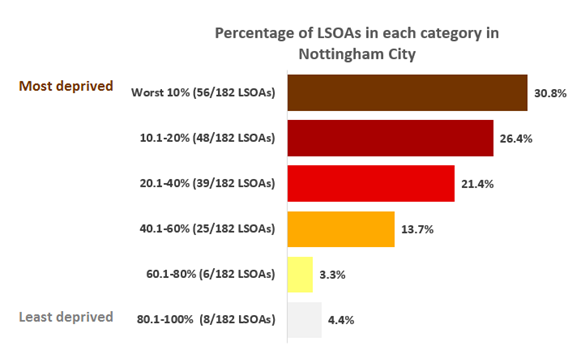 Nottingham ranks 11th most deprived out of the 317 districts in England using the Average Score measure.

Local Authorities which rank as more deprived than Nottingham using the Average Score measure are:

These all ranked as more deprived than the City in 2015, plus Burnley, Blackburn with Darwen and Hartlepool in 2019.

Nottingham ranks fourth most deprived of the Core Cities behind Liverpool (3rd out of 317); Manchester (6th) and Birmingham (7th). The others rank as follows: Newcastle upon Tyne (41st); Leeds (55th); Sheffield (57th); Bristol (65th).

The table and map below shows the LSOAs most affected by Multiple Deprivation. 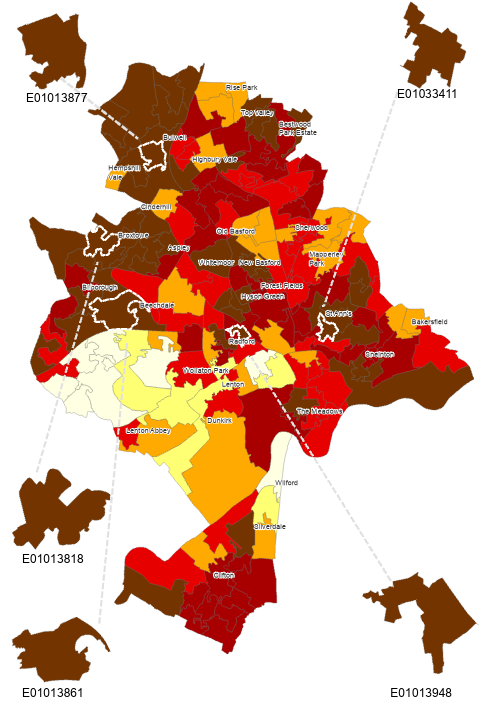 LSOAs in the 10% most deprived areas in Nottingham City

To find out all Lower Super Output Areas which fall in the 10% most deprived in Nottingham City please see the following dataset.

Indices of Deprivation by Postcode

The Ministry of Housing, Communities and Local Government have developed a useful tool which will help you understand the areas in which your customers live and the levels of deprivation in different areas.

Please see links below which include interactive tools to compare Nottingham City to other Local authorities and documents prepared by Local Government which explain the Indices of Deprivation in more detail.